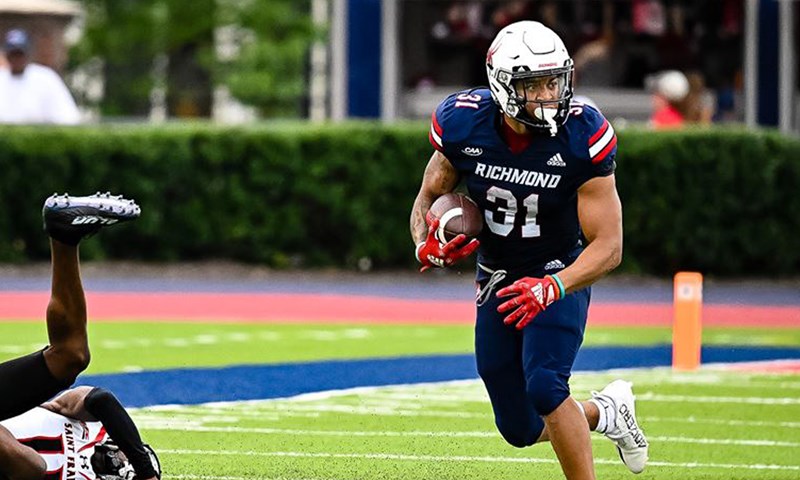 New Hampshire climbed to the top of the CAA Football standings 2-0 after holding off UAlbany, 28-23, as the league went 8-2 against non-conference foes on Saturday.

New Hampshire 28, Albany 23
The score of the box

Laube’s ground effort helped the Wildcats control the ball for over 37 minutes. UAlbany’s offense was paced by quarterback Reese Poffenbarger, who passed 18 of 27 for 264 yards and 2 touchdowns. The Great Danes also had 105 rushing yards from Todd Sibley and seven catches for 105 yards and 2 touchdowns from tight end Thomas Greaney.

UNH staged a pair of long runs to take a 14-0 second quarter lead as Max Brosmer hit Joey Corcoran with a 2-yard TD pass and Laube found the end zone two yards out. Laube’s 9-yard run midway through the third quarter increased the Wildcats lead to 21-3, but UAlbany fought back. A 15-yard run by Sibley and a 29-yard TD pass from Poffenbarger to Greaney made it 21-16 with 2:47 left. Laube’s third touchdown of the night from 37 yards out put UNH 12 past with 1:49 on the clock. A 10-yard TD from Poffenbarger to Greaney cut the deficit to five, but UNH was able to recover an onside kick and nearly ran out of time.

VU took a 17-0 lead in the second quarter as Connor Watkins ran for 11 yards and hit Dez Boykin with a 60-yard TD pass. LIU shot with 17-7 at halftime, but the Wildcats put the game aside in the third quarter as Barlee found the end zone from five yards out and Watkins joined Rayjoun Pringle on a strike from 14 yards.

Watkins completed 7 of 12 passes for 196 yards and 2 touchdowns, with Jaaron Hayek making four catches for 120 yards. Shane Hartzell contributed six tackles, a sack and a forced fumble for the VU defense.

Aaron Banks returned his second interception of the game for 35 yards for a touchdown with 1:22 left as Richmond (1-1) held off Saint Francis, 31-21.

Quarterback Reece Udinski completed 29 of 38 passes through the air for 248 yards and three touchdowns to set the pace offensively for the Spiders. Savon Smith rushed for a career-high 123 yards on 21 carries and added a receiving touchdown.

After a slow start, Richmond took a 14-6 second quarter lead after Udinski hit Smith with a 5-yard TD pass and connected with Aaron Dykes on a 16-yard throw. The Spiders took the lead 24-13 with 10 minutes left as Udinski capped a 91-yard drive with a 15-yard TD pass to Jasiah Williams. SFU shot within three, but Banks sealed the win with pick six.

William and Mary 37, Campbell 21
The score of the box

The Tribe offense had another big night on the ground with 271 yards. Bronson Yoder rushed for a team-best 95 yards and Malachi Imoh added 89 yards and 2 touchdowns on just six carries.

W&M took a 17-0 advantage in the second quarter on a 2-yard run from Donavyn Lester and a 10-yard pass from Darius Wilson to Colton Turner. The Camels closed at 17-14 early in the third quarter, but Imoh’s 20-yard run and Jones’ 33-yard pick pushed the Tribe ahead, 31-14. After Campbell recovered the deficit within 10 minutes, Imoh provided cushion by breaking away for a 56-yard touchdown run in the closing seconds of the third period.

Hampton 42, Tuskegee 10
The score of the box

Quarterback Malcolm Mays passed for 163 yards and two touchdowns, and also ran for a score, as Hampton (2-0) earned its second straight win by beating Tuskegee, 42-10. The Pirates defense held Tuskegee to just 175 yards, 26 of them rushing, and intercepted three passes.

Wide receiver Jadakis Bonds had five receptions for 122 yards and 2 touchdowns and Elijah Burris contributed 104 yards and a rushing touchdown. KeShaun Moore recorded a team-high 10 tackles defensively and Ohmante Jenkins had five tackles, 3.0 TFL and a pair of sacks.

Hampton took a 21-0 lead early in the second quarter after runs scored from Mays and Burris and a 29-yard TD reception by Bonds. Tuskegee went 28-10 after three quarters, but a 48-yard TD pass from Mays to Bonds with 11:39 to put the game away.

Quarterback Matthew McKay had a good night offensively, completing 18 of 26 passes for 230 yards and three touchdowns. Bryson Daughtry had six receptions for 80 yards and Jackson Parham had two TD catches. Marcus Hillman led the defensive effort with eight tackles, 2.5 TFLs and a sack.

Skyler Davis started Elon’s scoring by kicking off a school-record 52-yard field goal, and then added a 32-yard FG to extend his consecutive scoring streak to 12. McKay connected with Parham on a 3-yard pass in the second quarter and a 6-yard touchdown throw in the third period that made it 19-0. He capped the scoring with a 27-yard strike to Jordan Bonner.

Rhode Island 35, Bryant 21
The score of the box

The Rams also got big offensive nights from receiver Ed Lee with five catches for 135 yards and a TD and Marques DeShields with 105 yards and a TD rushing. Defensively, Jake Fire had nine tackles, 2.5 TFLs, 1.5 sacks and a forced fumble for URI and AJ Pena had six tackles and 3.5 sacks.

Hill used a pair of big plays in the second quarter to put URI up 20-7, connecting on a 78-yard TD pass to Ed Lee and a 63-yard strike to Kahtero Summers. The Bulldogs closed in under six at halftime, but TD runs from 16 yards by DeShields in the third quarter and 50 yards by Jaylen Smith in the fourth quarter put the Rams in control.

Delaware 35, State of Delaware 9
The score of the box

Thyrick Pitts had seven catches for 94 yards and a TD and Marcus Yarnes rushed for a team-record 99 yards, including an 82-yard rush in the third quarter. Linebacker Johnny Buchanan had another big night for the Blue Hens defense with 15 tackles and a TFL.

After falling behind early, Delaware took the upper hand for good in the first quarter after Trey Austin blocked a punt that was recovered in the end zone by Quincy Watson. Henderson took over from there, hitting Pitts with an 18-yard TD pass and connecting twice with scoring passes for 7 and 27 yards to tight end Braden Brose.

Towson 29, Morgan State 21
The score of the box

Quarterback Tyrrell Pigrome passed for 157 yards and three touchdowns and rushed for a team-best 124 yards as Towson (2-0) outscored Morgan State, 29-21, in the battle for Greater Baltimore.

Trailing 14-13 at halftime, Pigrome connected to Darian Street on a 20-yard TD pass in the third quarter opener to give the Tigers the lead. The Bears came back one point later in the period, but Pigrome found Street for a 28-yard throw to give Towson a 26-21 advantage. Keegan Vaughan kicked a pair of field goals for the Tigers, including a 28-yard one with 6:31 left.

Mason Woods had six tackles, a sack and an interception for the Towson defense.

Fordham 52, Monmouth 49
The score of the box

Shirden’s 96-yard run in the first quarter gave the Hawks a 14-7 lead and a 15-yard pass from Muskett to Dre Tucker pushed United’s lead to 26-14 early in the second period. Fordham had 21 unanswered points to increase by nine, but Shirden’s 80-yard flurry took MU to 35-32 with 9:58 left in the third quarter. The Rams took a 10-yard lead early in the fourth period, but 1 and 24-yard TD runs by Monmouth’s Owen Wright put the Hawks up 49-45 with 4:01 left. Fordham scored the winning TD with 56 seconds left.

Down 14-3 in three quarters, the Black Bears closed within four on a 6-yard run from quarterback Joe Fagnano with 13:24 left. A 68-yard run from Colgate cut the margin to 11, but a 7-yard TD pass from Fagnano to Montigo Moss and a 2-point conversion made it 21-18 with 4:02 to go. Maine pushed deep into Colgate territory in the closing seconds, but missed a 47-yard tying field goal with 25 seconds on the clock.

Fagnano passed 25 of 39 for 246 yards and a touchdown, with tight end Shawn Bowman making five catches for 73 yards. Maine’s defense, which held Colgate to 253 total yards and 10 first downs, got a team-record seven tackles from Adrian Otero.