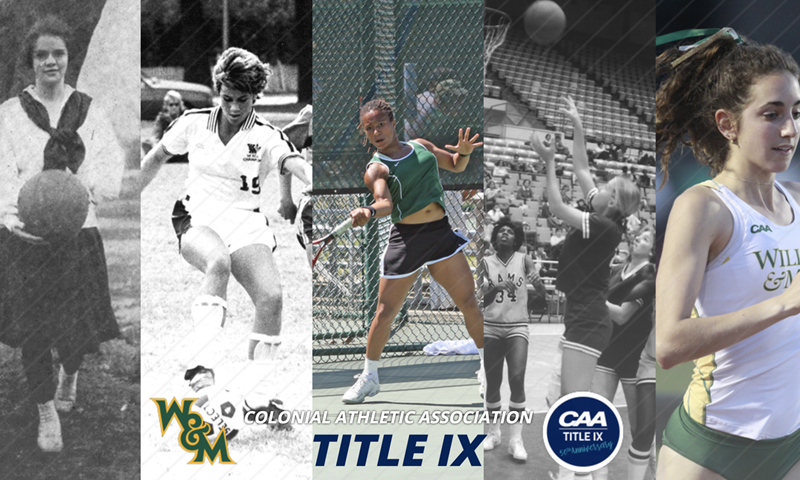 The Colonial Athletic Association continues its celebration of the 50e Title IX Anniversary recognizing five women from each institution who have made a significant impact during their time as a student-athlete, coach or administrator.

Today we present William and Mary.

Martha Barksdale, basketball (1919-21)
Barksdale was among the initial class of 24 women admitted to William & Mary, making it Virginia’s first coeducational state college. She helped found and was a member of the school’s first women’s basketball team. After graduating, Barksdale became known as the “Mother of William & Mary Women’s Athletics” after serving 38 years as a women’s basketball coach and 44 years at the school as a teacher. She still ranks second in career women’s basketball coaching wins (133) and was inducted into the W&M Athletics Hall of Fame in 1975. The Martha Barksdale Award is given annually to the top W&M’s senior female student-athlete.

Jill Ellis, soccer (1984-87)
Ellis distinguished herself for four years for the Tribe women’s soccer team, earning third-team All-America honors as a senior. A forward, she finished her career with 32 goals and 19 assists and ranks ninth on W&M’s all-time points list (83). Ellis helped lead W&M to the NCAA Tournament in all four seasons, including a berth in the Elite Eight in 1987. Ellis went on to an outstanding coaching career, guiding the United States Women’s National Team to back-to-back World Cup titles in 2015 and 2019. She became the first manager in Women’s World Cup history to win back-to-back championships and just the second to accomplish this feat in FIFA history. Ellis is currently the president of San Diego Wave FC in the NWSL.

Megan Moulton-Levy, Tennis (2004-08)
Moulton-Levy was one of the best tennis players to ever compete in the CAA, earning All-America honors six times and receiving CAA Player of the Year honors during her four seasons at William & Mary. . She competed in the NCAA singles and doubles championships in each of her four years, reaching the singles semifinals in 2006 and advancing to the doubles final in 2007. Moulton-Levy, who won the 2006 ITA National Indoor Doubles title, was selected as the 2007 ITA East Region Senior Player of the Year, and was a two-time recipient of the Arthur Ashe Award for Leadership and sportsmanship. She graduated as W&M’s all-time leader in combined wins with 249 (125 doubles/124 singles) and led the Tribe to a 76-27 doubles record with four NCAA Tournament appearances and three championships. CAA. As a professional, she reached No. 50 in the world doubles rankings and participated in 14 Grand Slam tournaments.

Lynn Norenberg Barry, basketball (1977-81)
Norenberg is the only William & Mary women’s basketball student-athlete to retire after a sensational career. She was chosen as the 1978 Piedmont Conference Player of the Year, was a three-time VAIAW All-State pick, and made the VAIAW All-Tournament team three times. Norenberg ranks fifth in career points (1,504) at W&M and still holds the school mark for points in a game (39). She was also an outstanding student, twice receiving Academic All-America honors and earning a spot in the Verizon Academic All-America Hall of Fame in 2001. Norenberg, who was inducted into Phi Beta Kappa, was also named a Senior Female Athlete from W&M. Year in 1981 and was placed in the school’s Athletic Hall of Fame in 1992. She worked as Assistant Executive Director for USA Basketball (1985-96) and was selected as WBCA Director of the Year in 1994.

Elaina Balouris Tabb, cross country/athletics (2010-14)
Balouris was a four-time CAA Athlete of the Year, receiving the award twice in cross country (2012, 2013) and twice in track and field (2013, 2014). She earned All-America honors six times (4 track, 2 cross-country), which was the most W&M track and field athlete, including first-team honors in 2014 after placing fifth in the 10,000m at the NCAA championship. She was named Portsmouth Sports Club‘s Virginia College Female Athlete of the Year in 2013 and placed sixth at the National Cross Country Championships to claim a spot on Team USA in 2015. Following her career at W&M, Balouris signed a professional contract with the Boston Athletic Association. She placed 12e overall, and second among Americans, in the 2021 Boston Marathon.