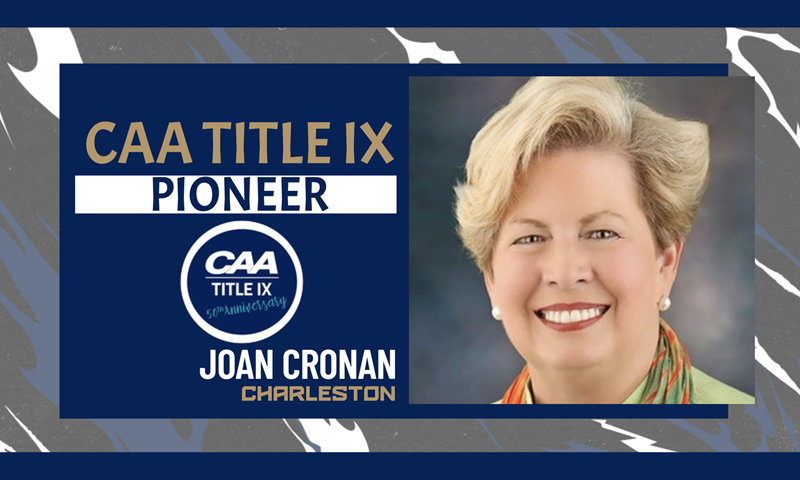 On the occasion of the 50e Title IX Anniversary, the Colonial Athletic Association is proud to honor the pioneers of women’s athletics from each of its 10 member institutions. These extraordinary women paved the way for the growth of women’s athletics programs around the conference.

Joan Cronan has been prominent in college athletics for over 40 years. Although best known for her time at the University of Tennessee, Cronan began her career in athletic administration when she became director of athletics at the College of Charleston in 1981. Her contributions have been recognized in the CofC Athletics Hall of Fame.

From 1974 to 1981, Cronan coached women’s tennis, volleyball and women’s basketball. Although the College had club athletic programs beginning in 1897 and early men’s varsity programs, it was Cronan who lobbied the administration to elevate women’s sports – basketball, tennis and volleyball. -ball, initially – at the university level. The 1978-79 season began a three-game AIAW national title streak for the women’s basketball program. Under Cronan’s leadership, Charleston was selected as the nation’s #1 women’s athletics program in 1980 by the American Women’s Sports Foundation. In 1982-83, Cronan oversaw the College’s transition to the NAIA.

In 1983, Cronan left Charleston to become a female athletic director at the University of Tennessee. In 2005, she was named Athletic Director of the Year by the National Association of Collegiate Women Athletics Administrators. Cronan became the first female director of athletics for UT’s entire athletics department in 2011. She was one of the first women to serve on the NCAA’s Executive Committee and Board of Management. In 2008, Cronan became the 4th woman to be named president of NACDA.