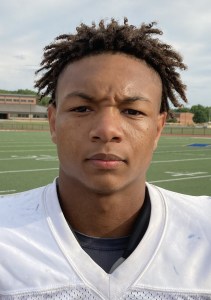 Greencastle is celebrating Old Home Week this year, which means many locals are back in town.

Devin McCauley, the Blue Devils football coach, knows many of these people. Invariably they will ask him how the team is going to fare this year.

It comes with the territory as a football coach, so McCauley doesn’t care. The problem is that he wants to know the answer to this same question.

Greencastle-Antrim are coming off a 4-6 season in which three losses have been by a score or less. They have lost quality players, but also have a lot of talent.

“We can put good athletes on the field,” McCauley said. “I like our group – they are physical and athletic. But our league is very good. Every game we play in the division (Mid Penn Colonial) is tough. There are no more easy games in the Colonial.

The Blue Devil defense have lost a number of starters, but their replacements look capable of filling their shoes.

The point guards will be a pair of middle linebackers in Jake Yelton and Logan Shifflett. Yelton (sr., 6-1, 210) had 79 tackles, including four for loss, and three sacks. Shifflett (jr., 5-11, 195) made 88 saves, had three sacks and two tackles behind the line, as well as one forced fumble, one fumble recovery and one interception.

McCauley said: “They are both very physical and can run well too. They both tackle well and are very present inside.

GA recently lost its strong safety candidate, so finding a replacement is a priority.

On offense, McCauley thinks the Blue Devils’ running game should live up to the high standards of the program, but a new quarterback will be needed to keep defenses honest with some passing yards.

“We’re going to rely on our running game – the guys up front fit our pattern well and the backs run strong,” he said. “Also, our perimeter blocking has improved.”

Tavon Cooper (5-11, 175) returns for his senior season as a halfback and he showed his versatility last year running 114 times for 740 yards (6.5 per carry) and five touchdowns, and catching 21 passes for 212 yards and a score.

“Tavon makes scoring plays and threatens to score every time we get the ball to him,” McCauley said.

Joining Cooper in the backfield will be fullback Xzavier Ramsey (jr., 5-9, 190), who will power the inside. He is coming back from an injury that cost him the whole of last year. Shifflett and Kline can also see action in the backfield.

Blocking for the backs will be Eberly at center, Szaflarski at right guard, Funk at right tackle, Horan at left guard and Kendal Johnson (sr., 5-11, 230) at left tackle. Kline and Sawyer Brookens (sr., 6-4, 190) will take care of the tight end position.

Andrew Kerns was the starting quarterback last year, but he was traded to St. Maria Goretti. Junior Logan Alvey (5-11, 160) is leaving the junior varsity team to take over, while junior Conner Wright (6-5, 200) is trying out the position for the first time.

McCauley said, “Alvey has done well so far. He’s been in the system and he’s smart and smart. Wright works as a quarterback and receiver – he’s a big-bodied guy.

Eby, who starts in attack and defense, will also take care of kicks and kicks, with Bangura taking care of kickoffs.

REMARKS: As if Eby wasn’t doing enough, he also plays on the GA golf team… Blake Diller is a candidate to fill in at strong safety… Greencastle’s non-league games are in Big Spring this Friday and at home against Berkeley Springs (W.Va.) and Delone Catholic.

OPENING OF THE SEASON AT BIG SPRING

The Bulldogs, former colonial foes of Greencastle, are now in the Mid Penn Capital Division and had one of their best seasons in recent memory last year, making the District 3 playoffs and finishing 8-4.

“Going to Big Spring on Friday will be a good test for us,” McCauley said. “We expect a good physical game of football with them.

“We have to get off to a good start and Big Spring is the first. I believe we will be competitive against everyone we face this year and I know we will play hard.