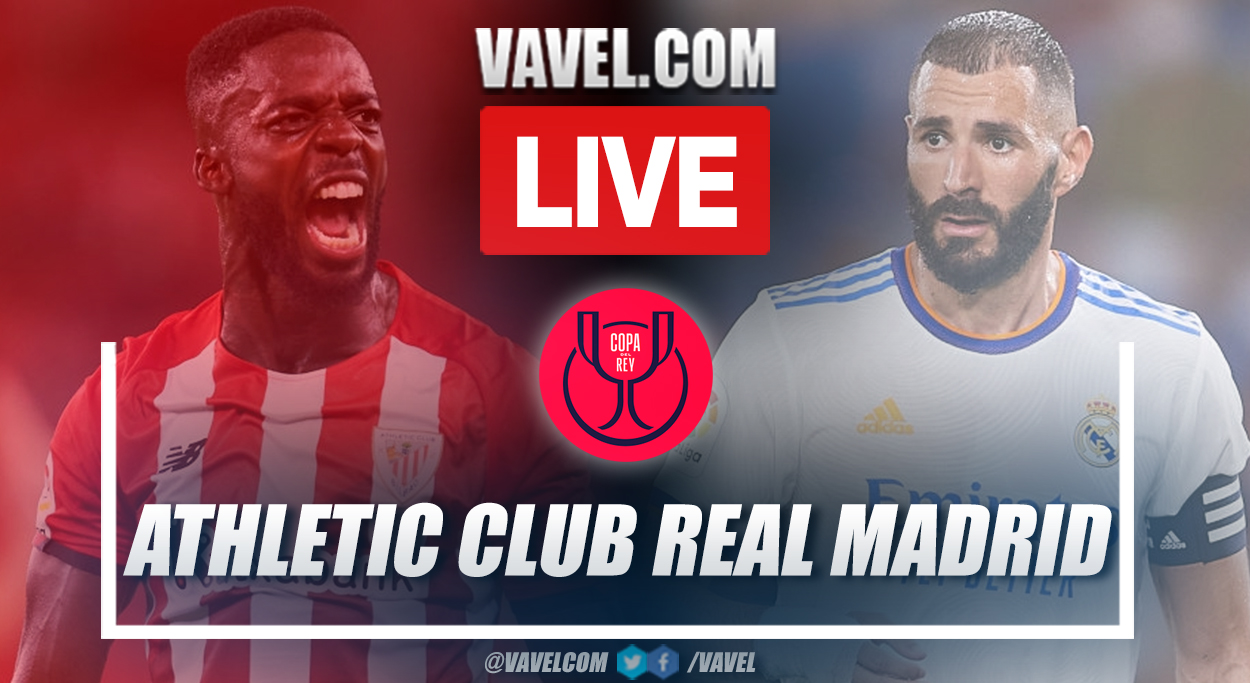 IT’S OVER IN SAN MAMÉS! BILBAO ATHLETIC CLUB WON! Marcelino Garcia’s side knocked out Real Madrid and are in the Copa del Rey semi-finals.

A nice pass from Camavinga to Isco, who fired a cross shot, but the ball went past the right post.

Six additional minutes will be played in the game.

ALEX BERENGUER! Casemiro’s mistake at the start, Dani García found Berenguer, who settled his body and shot with a left foot to open the scoring before the end of the match.

Last minutes of the match… Nothing indicates that someone will win before 90 minutes.

Nice collective Madrid game that ended with a nice pass from Asensio to Casemiro, who shot badly and goalkeeper Agirrezabala saved with ease.

75′ Not much happens in the game

There are 15 minutes left and the teams have failed to score.

Yuri Berchiche has been booked for Athletic Club.

De Marcos has been booked for Athletic Club.

55 ‘Real Madrid still does not settle

Carlo Ancelotti’s side are keeping a clean sheet, but they don’t have control of the game either. Bilbao are approaching with insistence, while in Madrid neither Asensio, nor Vinicius, nor Rodrygo have had clear chances.

50′ Bilbao is getting closer!

A cross from the right was headed in by Raúl García, but the ball went wide after a deflection. There is a review in the VAR analyzing a possible penalty.

The second half begins

The second half of the game is on. There has been a change in Athletic Club with the entry of Álex Berenguer in place of Nico Williams.

The first 45 minutes are over. Goalless draw between Athletic Club and Real Madrid.

Two extra minutes will be played in the first half.

Dani García has been booked for Athletic Club.

35′ Last stretch of the first half

The end of the first half is approaching. Athletic Club dominated the match in general terms, but the tie remains.

As Madrid take the ball to try to fend off Athletic, they fail to make a good collective move in attacking play.

Toni Kroos has been booked for Real Madrid.

On the left, Muniain came out between Lucas Vázquez and Casemiro, entered the box and shot, but the ball hit the outside of the goal.

20′ The match is still tied

Madrid haven’t yet managed to settle into the game.

15′ First quarter of the match

Dani García’s mid-range shot headed for the right post, but the Belgian keeper made a nice save to send the ball in for a corner.

There is a lot of friction in these first minutes, but the teams try to be dynamic in their attacking game.

The match between Athletic Club and Real Madrid begins.

The players of Athletic Club and Real Madrid enter the pitch at San Mamés.

PRE-MATCH | Statements by Marcelino García (trainer of the athletics club)

The teams warm up on the San Mames pitch

How the teams got to San Mamés

Happy to see you again

We’re ready to bring you the action from this game between Athletic Club de Bilbao and Real Madrid that will define a place in the 2021-22 Copa del Rey semi-finals.

In a few moments, we will share with you the starting line-ups of the Athletic Club vs Real Madrid live match, as well as the latest information from the San Mamés stadium. Don’t miss a detail of live match updates and commentary from VAVEL coverage.

How to watch Athletic Club vs Real Madrid live stream on TV and online?

What time is the Athletic Club vs Real Madrid match for the Copa del Rey?

At Real Madrid, the presence of Karim Benzema stands. The 34-year-old French forward, current Spain captain, is one of the top scorers so far this season with 22 goals.

In the Athletic Club, the presence of Inaki Williams stands. The 27-year-old Spanish striker is the team’s top scorer this season with five goals.

Despite having a great season, Real Madrid had to suffer in some of their matches, as it was precisely the game in which they beat Elche to qualify. Bilbao will be a more complicated opponent and it will be a difficult task, but the team coached by Carlo Ancelotti is more than clear.

Bilbao have just knocked out Barcelona in the competition, so they arrive with plenty of momentum to play this match, where they hope to leave another of the greats on the road to the final.

The match will be played at the San Mamés stadium

My name is Jhonatan Martinez and I will be your host for this game. We’ll bring you pre-game analysis, score updates and live news right here on VAVEL.