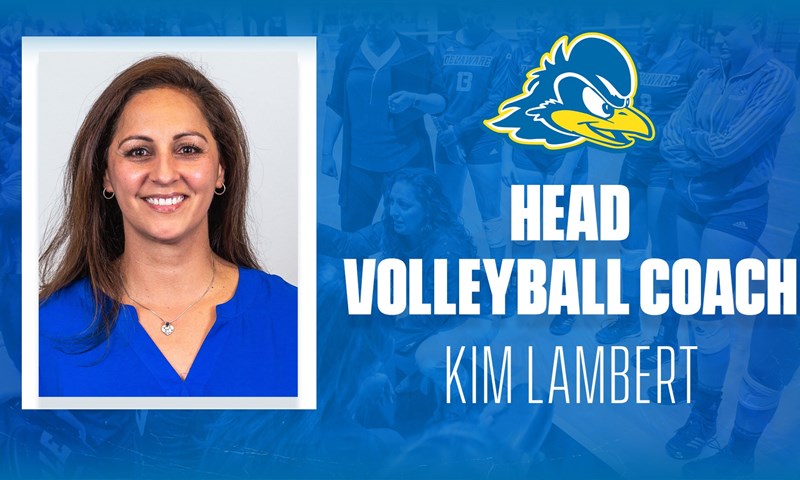 NEWARK, Del. –Intercollegiate Athletics Director Chrissi Rawak has named Kimberly Lambert the head volleyball coach for the Blue Hens program. Lambert takes the reins of the program after spending the past five seasons on the Delaware volleyball team.


“I am incredibly excited to have Kim as our next head volleyball coach, she has been instrumental in the growth and development of our student-athletes and the program both on and off the court over the for the past five years,” Rawak said. “I’m confident that Kim will be able to take this program to the next level of competition and winning championships.”


Lambert arrived in Delaware as an assistant coach in 2017 and was promoted to head coach in 2019. Lambert combined 20 years of coaching experience on his resume, including a stint as head coach of Division I. Having worked on the east and west coasts, as well as a Power 5 institution Lambert brings a complete experience to the position.


“I am extremely honored and beyond grateful to have the opportunity to lead this team that I know and love so well,” Lambert said. “I would like to thank Chrissi, Jen Vining-Smith and the entire management team for their trust in me and the work we have already put into developing this program over the years. I am so proud of our cultural position as a program, both on and off the pitch, and I’m excited for the future with this incredible group.”


Lambert has helped Coach Blue Hens to two Colonial Athletic Association (CAA) Tournament Appearances in two of the last three seasons, including a semifinal showing in 2021. Delaware finished the 2021 season with an overall record of 15-13 and a mark 0.500 in conference play. The Blue Hens also have three players earning all-conference honors in 2021.


Prior to Delaware, Lambert served as an assistant coach at North Carolina State and a season as operations manager from 2013-16. North Carolina State won 20 games in its last drop, had a school record of 13 wins in the Atlantic Coast Conference and notched the first top-10 win in program history with a win at 10th overall from Florida State.


Lambert served three seasons as head coach at Texas A&M-Corpus Christi from 2006 to 2008, where she was one of the youngest head coaches in Division I. She coached newcomer of the year from the 2006 Southland Conference to career-ending Christie Feliz. as the school leader in kills per set.


Lambert was also the top assistant at UTEP from 2004 to 2005, where she was the underage recruiting coordinator, defensive coordinator, and outside hitting coach. She was the head coach of Caldwell High School (Texas) in 2003, when she led the Lady Hornets to the 3A State Semi-Finals. She was named District 18-3A Coach of the Year and Brazos Valley Region Coach of the Year.


Lambert began her coaching career in 2002 as an assistant coach at Rice. A native of Sugar Land, Texas, Lambert played at Texas A&M-Kingsville and earned a bachelor’s degree in kinesiology in 2001.