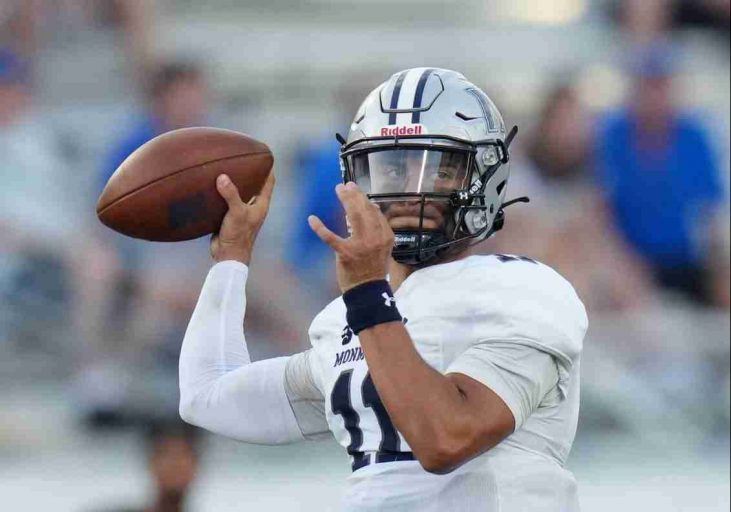 Monmouth University didn’t have to try too hard to sign Eddie Morales III, the all-around footballer from Howell High School. Turns out the Rebel had a pretty good idea of ​​where the Hawk program was headed: up.

“I saw it coming in high school,” the Howell High graduate said. “It was only a matter of time before that happened.”

It was Monmouth’s football that raised its national profile. The Hawks took another step forward nationally by joining the Colonial Athletic Association (CAA), perhaps the top conference in the country’s Football Championship Subdivision (FCS) this year.

During the CAA media day, the ex-rebel expressed his joy at the prospect of playing for Monmouth in the CAA.

“I’m glad it happened while I was still playing for Monmouth,” Morales said.

Monmouth head coach Kevin Callahan noted that everyone in the program is looking forward to playing in CAA and meeting the challenges ahead. The 13-school conference has national powers like national championship winners Delaware and Villanova.

“Everyone is excited,” said Callahan, who is in his 30th year as Monmouth’s sole head football coach. “We are thrilled and honored to join CAA, which is one of FCS’s elite conferences. That puts four, five or six teams in the playoffs. We know we are going to be challenged every week.

Due to the top-to-bottom quality of CAA teams, Callahan, who brings a career-best 173-129 in the season, stressed that developing roster depth will be crucial for Monmouth.

“We have to have a lot of depth,” Callahan said. “[The CAA] may be a war of attrition. We spent the off season and summer working on our strength and conditioning programs.

“It’s a great conference to attend,” he said. “They put a number of teams in the playoffs. We play against great teams every week. Every week we have to prove ourselves.

Monmouth moved to CAA from the Deep South where the Hawks made their big break by winning conference championships, making the FCS playoffs and winning a playoff game and earning a national top-20 ranking (until ‘at No. 12).

The CAA showed the respect it has for Monmouth’s program by placing four Hawks on its preseason All-Conference squad. Morales, named to special teams as a punt returner, and quarterback Muskett made the first team with running back Juwon Farri and punter Ryan Kost receiving honorable mentions.

“It’s humbling,” Morales said of being a preseason pick, adding, “it’s just preseason, and the focus is on the team.”

Callahan said the Hawks will rely on Muskett, who led an offense that averaged 32 points per game while going 7-4 in 2021, and running back Farri. Both were first-team All-Big South picks last fall.

Muskett, a junior, passed for 2,651 yards and 25 touchdowns in 2021. As a three-year-old starter, he brings valuable experience to the position that will be important going into a new conference against teams the Hawks never have. faced before.

Farri, a redshirt senior, rushed for 705 yards and eight touchdowns.

Although the Hawks have completed their entire starting line, Callahan doesn’t expect the team to miss a beat this year. The return of two-time All-Conference tackle Justin Szuba (Gr.), who missed last year through injury, is a big reason. He was twice picked by All-Big South.

Defensively, Monmouth’s strength is the secondary led by fellow graduate student Morales. The cornerback had a team-high three interceptions and six pass breakups in 21. He recorded 57 total tackles, including 35 solo.