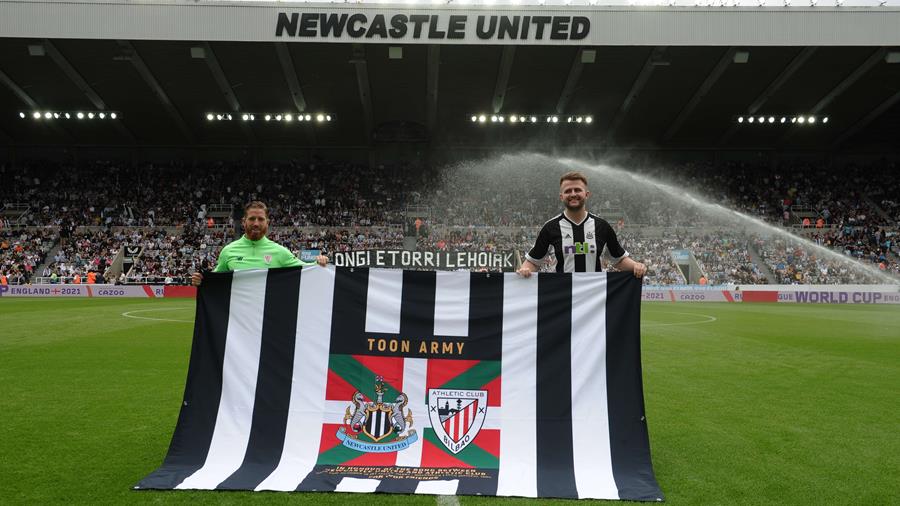 Athletic Club captain Iker Muniain made the presentation at Wor Flags ahead of the clubs pre-season friendly at St. James’ Park on Saturday afternoon, handing over a flag displaying the crests of both clubs.

United first met Athletic Club competitively in the UEFA Cup second round in 1994.

The Magpies won the first leg 3-2 at Tyneside in October 1994, but narrowly lost the second leg to a José Ángel Ziganda goal at the historic San Mamés stadium. After an aggregate score of 3-3, Los Leones trumps away goals.

Then, in 2001, United legend Rob Lee picked the Basque club as his testimonial opponent, cementing a lasting friendship between clubs and cities.

In a video recorded especially for Newcastle United supporters, Athletic Club chairman Jon Uriarte described the flag gesture and paid tribute to the bond between clubs and supporters.

“Thirty years ago, our clubs crossed paths for the first time.

“Now, with this opportunity to see each other again, we wanted to express the pride we feel in the bond between our two fanbases by presenting you with a flag containing the crests of our two clubs together.

Newcastle United warmly welcome the players, staff and supporters of Athletic Club to St. James’ Park and would like to thank them for this wonderful gesture.