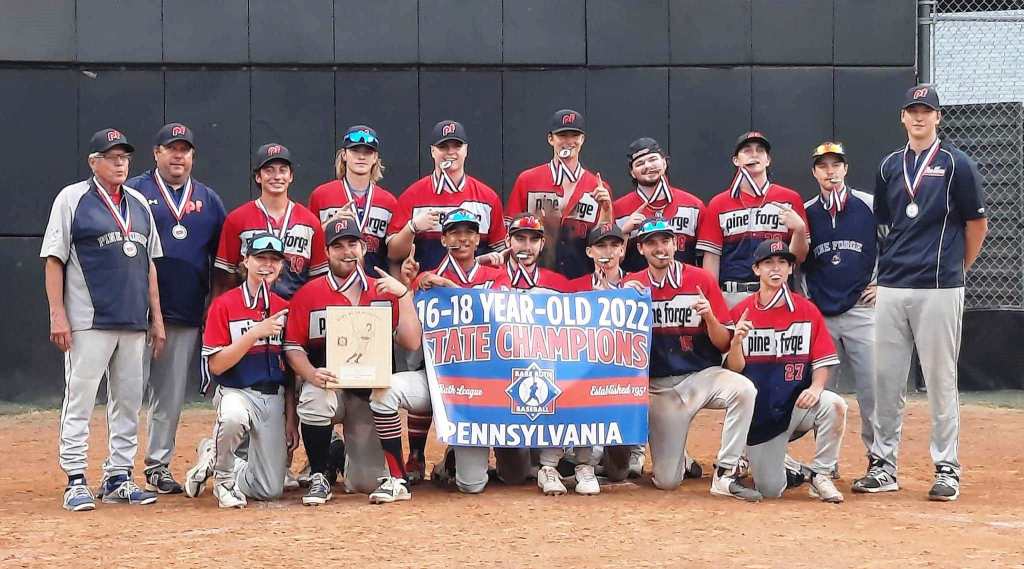 The Pine Forge Athletic Association recently wrapped up its 52nd baseball and softball season by celebrating its championship-winning teams and growing participation.

The association was led in 1970 by Township of Douglass, Berks County, residents Merle Harner, a retired union carpenter, and Robert “Skip” Trainer, a former township supervisor and retired salesman for Prudential Insurance. Both had children who wanted to play youth sports. Finding the Boyertown program was overcrowded, Harner and Trainer decided to form PFAA. Then Richard A. Zuber succeeded Harner and Trainer as president. In total, Zuber has been involved with the program for over 30 years, first as a player, then a coach and now president.

His freshman year consisted of one team and 12-15 players playing on a small field at Pine Forge Elementary School. Today, PFAA games are played at numerous grounds in Douglass Township, Bally and Pottstown, including the Douglass Park complex and the Hill School.

The association supports more than 30 baseball and softball teams and 400 players who represent eight school districts in three counties – Boyertown, Pottstown, Upper Pottsgrove, Owen J. Roberts, Phoenixville, West Chester and Daniel Boone. Victories this season included the Senior Babe Ruth team winning the 2022 State Championship, the 14u team taking first place for the 2022 Berks League season for a second year, the 12u Tribe team ending their season with another championship victory and the 15U baseball team went undefeated in the TriCounty League and won the championship that summer.

“We have to do something right,” Zuber, president of the Pine Forge Athletic Association, said in a statement. “In fact, I can’t wait to share what we’re doing deliberately to attract 20% more baseball and softball players this year. We are growing while other clubs are in decline.

Zuber likes to call his program a hybrid.

“I think that’s the reason for our success,” Zuber said. “We have something for everyone. We’re more flexible. Our mission is to accommodate what kids need – not coaches or parents – to learn and love the game.”

The association’s mission is to provide instruction in the basics of the game of baseball and softball and to instill good sportsmanship, with an emphasis on opportunity to play.

Zuber explained that the association is not a recreational league where all children learn to play and who want to play ball a few times during the week but are, more or less, casual players. Moreover, it is not an Amateur Athletic Union, an organization that requires a substantial monetary investment – between $5,000 and $10,000 per summer – and represents a highly competitive travel ball tournament every weekend through the country.

“Various programs have been demanding for young players. They’ve burned or lost the love of the game. We want PFAA players to have a life – working jobs, taking family vacations, or playing on their school-sponsored teams while they learn the game and compete,” Zuber said.

Zuber said the Pine Forge Athletic Association is taking the best of both worlds. Its Senior Babe Ruth baseball teams have a regular season and play multiple games during the week, but also participate in a Tournament Trail where players compete in district championships, state level competitions, mid-Atlantic competitions and World Series playoffs.

“Babe Ruth’s senior PFAA team has won their way to Mid-Atlantic contests four of five seasons. Our players have talent and we are determined to get to the World Series and win them too,” Zuber said.

“I’m proud to say that we have ‘Cadillac’ lots for kids to learn and play on — three lighted lots — one in Pine Forge, one in Pottstown and one of two in Bally. And we play on the Hill School college field,” he said.

The association’s softball program has been in existence for 30 years and offers softball for ages 6 to 18.

“We have produced many softball players who have played at the high school and college levels. They also like to play on a lit court,” Zuber said.

Zuber’s involvement began over 30 years ago as a coach and president of the organization. He keeps two things front and center: learning the game and loving it. He shares that the first thing he asked the last player – a young man from Texas – who wanted to enroll in the program, “Do you like to play baseball?”

“I always tell young people that I’m crazy, crazy to be a coach after more than 30 years of involvement. But I love watching kids develop, and we all want to create cohesive teams. I sincerely believe that the PFAA is the place to go to learn the game of baseball,” Zuber said.

Developing talent and creating cohesive teams are his goals as a coach and also as owner of Richard A. Zuber Realty. He will celebrate 50 years as a licensed real estate agent in 2023.

“And although I’m crazy, it’s so rewarding every once in a while when a player joins our league after playing in other programs,” he said.

Zuber says one of his recent players said to him, “You made this game fun again for me; I love coming to the ballpark.

“So how do I stop coaching when I know there are kids out there who need to fall in love with baseball all over again?” concluded Zuber.