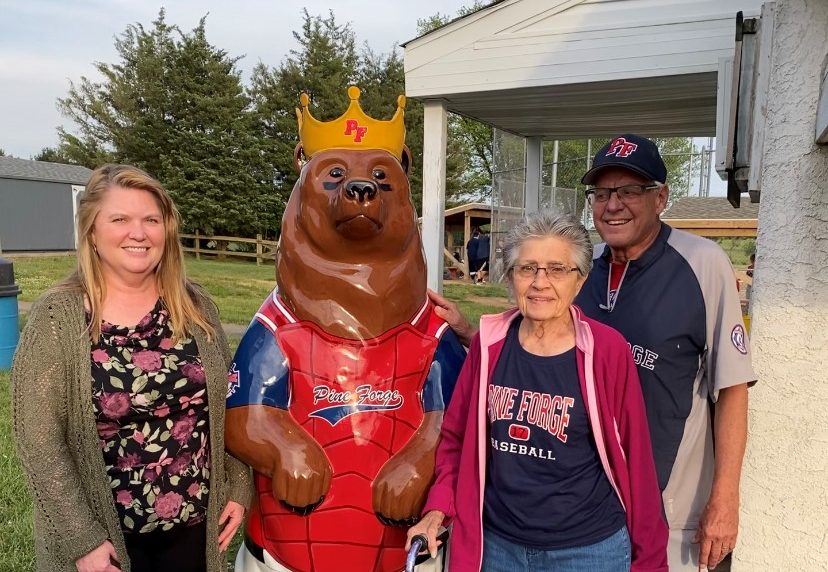 “‘Hi! I’m Justin King, and I’ll be your catcher tonight for Pine Forge!’

“That’s how he greeted the home base referee at the start of every game,” remembers Carol King, Justin’s mother. “And always his greeting was accompanied by a big smile and a handshake.”

King shared memories of his son after the dedication of “King: # 51” on 76e fiberglass sculpture in the Bear Fever community art project in Boyertown. The sculpture was created in memory of Justin and made its debut in the 2021 season opener at the Pine Forge Athletic Association (PFAA) baseball field on May 19, 2021.

Justin fell off a cliff in 2019 during the first weeks of his freshman year at Bloomsburg University. The circumstances surrounding his death remain a mystery although those in charge of Greek Life have been fired and all Greek Lives were initially placed on probation and recently completed at Bloomsburg University. Suspicions of illegal recruitment, hazing activities and alcohol consumption by minors at a fraternity party remain.

Recalling his son, King added, “Even as a little boy he would speak directly to someone in military uniform and thank them for their service. In any context, he would look for ways to make the most of any opportunity. He would be the first to help 9 and 10 year olds in training, for example, remembering how much he enjoyed helping older players when he was young.

Justin started playing T-ball at the age of 5 for the PFAA and played enthusiastically until he left the league at 18. His father told Justin and his older brother Drew that whenever they were less than happy to play or train their baseball life was over, but they never shied away from getting ready for a practice or a game, “King continued.

“Baseball was Justin’s love. Rightfully so, he scored the team’s winning points – the outs – in the last 2 playoff games of his “career” and, just the weekend before his death, he was coming home. [from college] to grab his baseball gear, planning to “walk” and try for a spot on the Bloomsburg baseball team.

“He loved baseball. But beyond that, he was dedicated, respectful, and caring – just a great kid, ready to be a great adult. His senseless death was such a tragedy.

“It’s every parent’s nightmare,” King said. “Waking up on Saturday morning to the police knocking on your door with the horrific news of your child’s death. There were new texts on my phone from the night before, messages he’d sent hours before he died, joking with his dad and me.

“But that wasn’t the end; Justin’s death shattered David [King’s husband.]; he fell ill and died 8 weeks after Justin. During our boys’ early years, David had been a stay-at-home dad and coached our boys at Pine Forge. He loved and devoted much of his life to their well-being. Through these tragedies, I became a member of a club to which I never wanted to belong, ”she shared.

Mourning King’s death, the PFAA raised donations on King’s behalf to create annual scholarships to support a deserving baseball and softball player and to secure a Bear Fever to preserve Justin’s memory. “Honoring Justin and preserving my memories is so important to me,” King concluded.

By dedicating the fiberglass sculpture, Richard A. Zuber, president of the PFAA and longtime baseball player and coach, recalled memories of Justin and PFAA founder Merle Harner.

“Justin was a perfect example of the kind of kid Merle had in mind when he started the Pine Forge Baseball Organization with his friend and brother-in-law. [Robert H.] “Skip” Trainer in 1970, ”Zuber noted. “As Merle’s son-in-law, I am confident in my belief that he would want this honor for Justin as part of his own legacy,” Zuber said.

Zuber trained with Harner and assumed the presidency of the PFAA after Harner retired. Throughout his life, Zuber spent much of his summer playing or coaching baseball.

“My husband started the league to help more kids,” Joy Harner explained. “He was so upset when his sons started playing that they had to share a baseball cap and shirt. “Every child should have their own shirt,” he complained. Finally, I told him he should stop complaining and start his own league, ”she joked. “And that’s what he did!”

“Mush” Bechtel [Carroll D., owner of former Bechtel Sporting Goods in Pottstown, PA] contributed the shirts; he was confident that Merle would pay him off eventually. And so, he and Skip took up the challenge and here we are, 50 years later!

Joy, a gifted softball player, and Merle met at a baseball picnic; their 5 children, 2 daughters and 3 sons, played baseball or softball, helped out at the snack bar during games each season or in grocery runs to get prizes for the PFAA Saturday night bingo fundraisers .