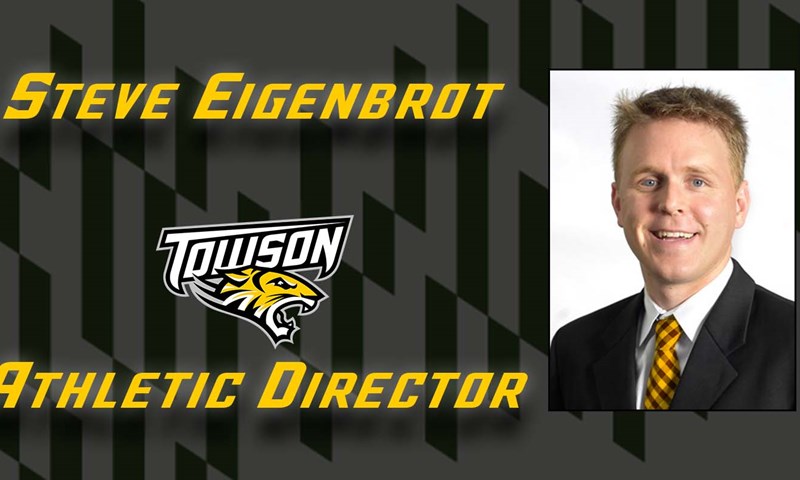 Towson University President Kim Schatzel announced on Monday that Dr. Steven Eigenbrot will join TU as director of athletics. Eigenbrot joins TU from the University of South Carolina, where he currently serves as assistant athletic director. Its start date is March 28, 2022.

As athletic director, Eigenbrot will report directly to President Schatzel, serving in the president’s cabinet and leading TU’s NCAA Division I intercollegiate athletics program, including the approximately 100 staff who support 19 teams. sports with more than 600 student-athletes.

Eigenbrot was selected after a nationwide search, co-chaired by former Vice Chairman of the Board of Regents of the University System of Maryland Barry Gossett and former Chairman of the TU Board of Visitors Fran Soistman ’79.

“I am very grateful to the co-chairs and members of the search committee for their significant contributions to the success of this national search for the next Towson University Athletics leader,” said President Schatzel. “And I couldn’t be happier to welcome Steve, his wife, Erin, and granddaughter, Sutton, to Towson University. Steve is a proven leader who shares TU’s commitment to excellence in class, in the community and in competition for I have every confidence he will be up and running as he works with coaches, staff, student-athletes, university partners, alumni and supporters of TU Athletics to strengthen TU’s position as the premier mid-major collegiate athletic program. It is indeed a great day to be a Tiger!”

Gossett adds, “Steve’s resume speaks for itself, and getting to know him over the past few weeks makes him the right choice to lead Towson Athletics. Coming from a major SEC program, but with a knowledge of Maryland and the region, he is poised to make Towson University a destination for talented student-athletes, coaches and staff, and a home for championships for years to come.”

At the University of South Carolina, Eigenbrot held various leadership positions for 12 years. Most recently, he served as Assistant Athletic Director, overseeing fundraising, box office and various facility projects. Previously, he was Deputy Executive Director of Sports for Development and CEO of The Gamecock Club, which raises funds to support student-athletes. He has served as the principal program administrator for the men’s basketball, baseball and both Gamecock golf programs since 2019.

“I am extremely honored to lead TU Athletics and very grateful for the trust President Schatzel and the Research Chairs have placed in me. I started my career in athletics about 20 years ago here in Maryland and I don’t couldn’t think of a better opportunity for our family to return to the region given Towson’s leadership and the future of competitive excellence that awaits us,” Eigenbrot said. build on the strong foundation that exists here at TU and collaborate with the range of stakeholders in the communities of Towson and greater Baltimore.”


University of South Carolina Athletic Director Ray Tanner added, “Towson University is hiring an outstanding administrator, dedicated leader, and great individual in Steve Eigenbrot to lead its athletics department. Steve has done a terrific job here at Carolina in our areas of fundraising and facility development. He has established great relationships with coaches and student-athletes as a sports administrator and has been a vital part of our leadership team. I wish the Eigenbrot family the best in this next stage of Steve’s career.

Soistman adds “Steve’s experience leading key strategic initiatives that have leveraged alumni and philanthropy has stood out during this research. I am confident that his combination of experience, energy and leadership skills will help our student-athletes win both on the field and in the classroom, and prepare them for lifelong success.”

He joins TU at an exciting time for Tigers Athletics.

Recently, the athletic department has achieved significant milestones in student-athlete success, community service, and diversity and inclusion. TU was recognized with the 2018-19 NCAA National Championship for Most Hours of Community Service by a Division I School, as well as the 2021 NCAA and Minority Opportunities Athletic Association Award for Diversity and inclusion. TU Athletics has consistently achieved the highest graduation success rate (GSR) among Division I universities in the Maryland University System.

Additionally, TU facilities have made historic investments and improvements, including the construction of the South Campus project, home to Tiger Stadium (women’s lacrosse and soccer), Tiger Softball Stadium and TU Field Hockey Complex. Additionally, Johnny Unitas® Stadium, SECU Arena and John B. Schuerholz Park have undergone major upgrades to make TU one of the best mid-size sports venues in the country.