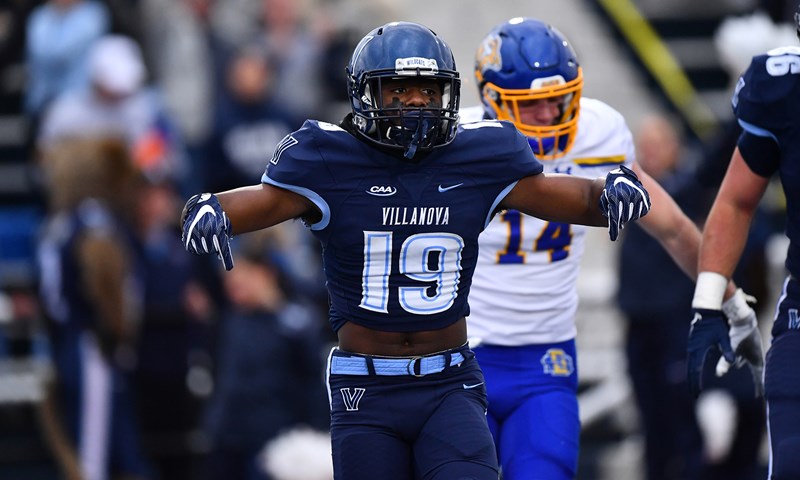 RICHMOND, Va. (July 28, 2022) – Villanova, who went 10-3 overall last season and won a share of the CAA Football Championship for the first time since 2012, has been chosen to win the CAA football title in 2022 based on a vote of the league’s head coaches and media relations directors.

Villanova is returning many of its best attacking players from last year’s squad that advanced to the FCS playoff quarterfinals for the first time since 2014 and was ranked No. 8 nationally. Returning for the Wildcats are receivers Rayjoun Pringle and Jaaron Hayek, who combined for 17 touchdowns, running backs Jalen Jackson and DeeWil Barlee, and All-America offensive lineman Michael Corbi. In defense, safety Ethan Potter is one of three returning starters.


Richmond closed the 2021 season on a four-game winning streak to finish 6-5 on aggregate. Running back/returner Aaron Dykes leads a field of seven starters for the Spiders offense, which added graduate transfer quarterback Reece Udinski and receiver Jakob Herres. There are also seven starters in the Richmond defense, including All-America linebacker Tristan Wheeler.


CAA Football expands to 13 teams for the first time in 2022 as Hampton and Monmouth join the conference. CAA Football has had a team in the FCS Championship Game 11 times since 2003, a team in the playoff semifinals for the past nine seasons, and a team in the quarterfinals every year since 1991. Eleven of the 13 current members of the league have competed in the FCS playoffs since 2015.


CAA Football also announced its all-conference preseason roster. Delaware led all schools with five honored players while Villanova had four. Stony Brook running back Ty Son Lawton, who ran a league-high 1,088 yards and 10 touchdowns in 2021, was named preseason Offensive Player of the Year. Defensive end William & Mary Nate Lynn, who was among the best in the nation with 12 sacks and six forced fumbles in 2021, was chosen as the preseason Defensive Player of the Year.

(Selected by a vote of Head Coaches and Media Relations Directors)

(Selected by a vote of Head Coaches and Media Relations Directors)