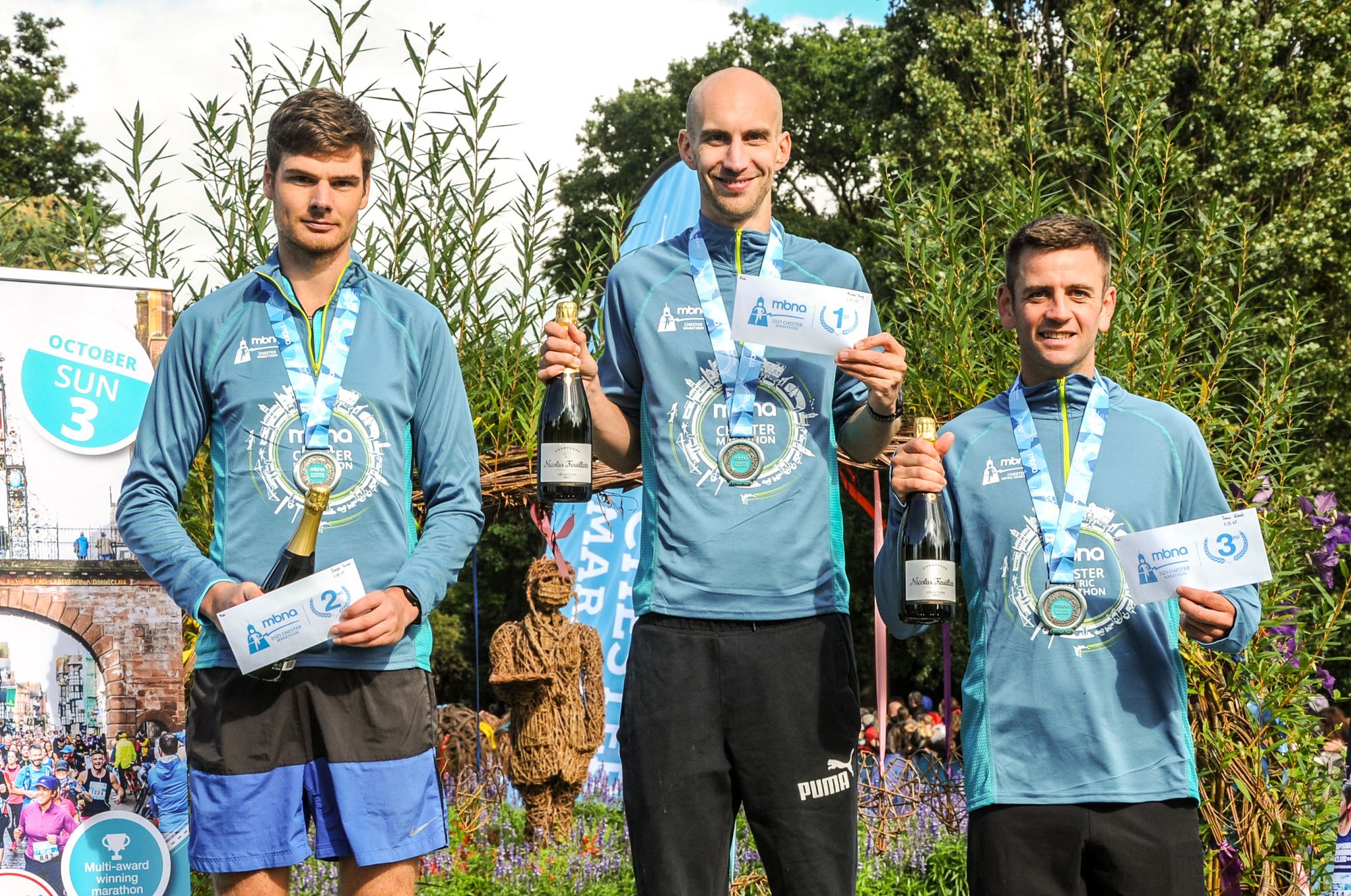 Michael Young at the top of the podium

Michael Young celebrated his success at the Chester Marathon.

Keely Smith, also representing West Cheshire AC, was second in the women’s competition with an impressive time of 2:58:28.

Liz Renondeau, who represents West Cheshire AC on the track, won the Chester Metric Marathon representing the Cheshire Dragons and posted a time of 1: 42.12.

Jamie Richardson of West Cheshire AC was the first home for the victorious Northwest Under-17 men’s team after placing sixth overall in the London Mini Marathon. Sisters Ruby and Aimee Phillips, and Noah Woolgar, all of West Cheshire AC, achieved a 1-2-3 respectively in the Chester Marathon Fun Run on the Roodee.

Neil Finegan, Jodi Bemand and Fraser Campbell all took the podium in their age group races in the first round of the North Wales Cross Country League in Wrexham. Finegan won his over-45 age group in 32:21, while Bemand was second in his under-17 age group at 24:32, and Campbell was third in the under-men 20 years old in 31:58.

Henry Robinson finished the men’s under-17 race in third place with a time of 22:13. A total of 237 youth represented 33 different schools in Round 2 of the West Cheshire AC Schools Cross Country Race Series held at Ellesmere Port Sports Village. Daniel Walker (Tarporley) finished ahead of Christleton duo Joseph Smythe and Noah Woolgar in the boys ‘eighth grade, while Ruby Phillips (Whitby) won the girls’ eighth grade.

Emilia Pyper and Eleanor Wheeler (both Bishop Heber) finished first and second ahead of Edith Carr (Upton) in the seven-year-old girls race, while Thomas Rimmer and Ruben Connor (both Kings) and Oliver Eaton (Upton) finished finished first, second and third in the seventh grade boys’ event.

Ethan Edge (Christleton) won the Boys of Year Three race ahead of Jack Jones (Our Ladys) and Jack Arnold (Upton Heath), while Farndons’ pair Zara Evans and Molly Quinton finished first and second in the girls of the year three race ahead of Hettie Styrme. Walker (Kings).

The next round of the West Cheshire AC Schools Cross Country Race Series will be held on Saturday November 6 at Ellesmere Port Sports Village.