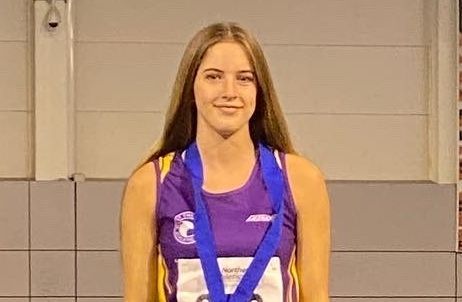 The West Cheshire Athletic Club pair impressed at the regional Under-13 and Under-15 event held at the English Institute of Sport in Sheffield.

Nathan cleared 1-65m in the under-15 high jump and reached 12.10m in the shot put to secure a double success.

And Emily celebrated victory in the Girls Under-15 60m final with a time of 7.97 seconds after winning her heat in a club record time of 7.93 and her semi-final in 8 .00 seconds. The couple were joined at the event by Theo Shepherd, Lydia Walker, Macy Brett, Macey Jones, Sophie Haslam and Teresa Arvidsson.

Theo clocked a new personal best in the under-15 200m clocking 25.51 seconds for fourth place in the final and was eighth in the 60m final with 8.13 seconds.

Neil Finegan and Jodi Bemand won their age divisions in the final round of the North Wales Cross Country League held at Marches School, Oswestry.

Jodi was first at home in her women’s under-17 age group and ninth overall in the women’s race, supported by club teammates Claire Harris (27th), Ellie Robinson (fifth lady over 45 years and 29th overall), Henrietta Duffey (sixth lady under 17 and 52nd overall), Angela Tegg (12th woman over 45 and 55th overall), Joy Hickman (eighth woman over 55 and 58th overall) and Debra Bemand (second female over 50 and 60th overall), to earn the team’s fourth place on the day and fifth team overall in the Premier League.

Fixtures this weekend include the England Athletics Age Group Indoor Championships (U15s/U17s/U20s), at the English Institute of Sport, Sheffield, on Saturday and Sunday.

Adrienne R. Benton Named to BAA Board of Governors